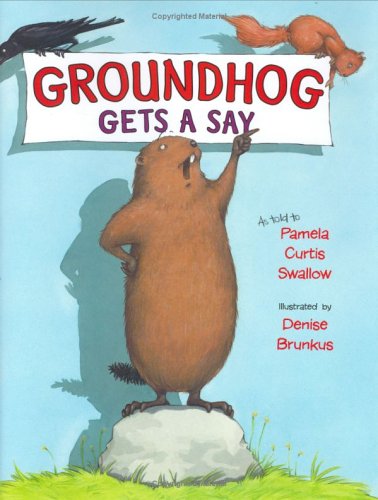 Groundhog Gets a Say

Like many celebrities, Groundhog thinks he's gotten a raw deal from the media. "Yesterday I was news, a star, king of the mound! Everyone wanted my weather report. Today... nothing!" With help from an adoring documentarian and fellow groundhog, the star of February 2 makes his case for deeming all of February "Groundhog Appreciation Month." Swallow ( ) has marshaled a host of impressive tidbits about the groundhog (aka woodchuck or whistle pig); even more important, she brings them to life with factual yet funny analogies ("My head is like a submarine periscope—my eyes, ears and nose are set up high so I can see what's around" or "We're not all that quick, as animals go. But we can run as fast as an average fourth-grader") and a snappy conversational tone. Two bystanders, a crow and squirrel, offer running commentary ("He's already the only animal with a national holiday... unless you count the turkey," observes the crow. "But look where that guy ends up at the end of the day," says the squirrel). Brunkus will be known to many readers as the illustrator of the Junie B. Jones books—and they may even recognize the same combination of spunk and vulnerability that's made the heroine so visually memorable. A nifty way to open up the idea of a minor but fun holiday. Ages 5-up.