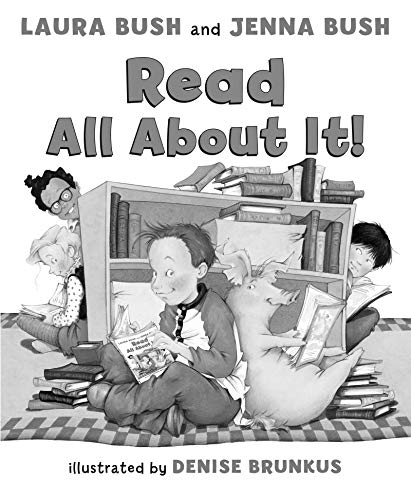 Read All About It!

When his homeroom teacher, Miss Libro, reads aloud each day, Tyrone stubbornly ignores each story. He flies paper planes or pokes at his shoe with a pencil. One day, Tyrone actually listens, and he's amazed. Book characters spring to life, right in the classroom, and disappear when the book ends.

There are people who will love this book. After all, it addresses a problem seen across the country: many children, especially boys, choose not to read because they see books as dull. The story line of a misunderstood character who learns an important lesson and is eventually able to succeed in school is a common, and often beautiful, trajectory in children's literature. The illustrator is loved for her work with the popular Junie B. Jones series. And the authors! The authors are sincere in their love of reading—plus, they are famous.

But good intentions are not the same as a good book. The message here is that something magical happens when readers are drawn into the lives of characters. Ironically, Tyrone, the main character and narrator, never does come to life. We do not empathize with Tyrone because he's a conglomerate of traits that do not fit easily in the same person. To begin with, although Tyrone is a braggart and a self-described class clown, he sounds like Laura Bush. Here is Tyrone describing a chapter-book pig that comes to life in his classroom: “He was dirty and disorganized. He ate the most grotesque combination of leftover school lunches.” Tyrone promptly joins his classmates in teaching the pig table manners—not exactly what one might expect of a ruffian who tyrannizes the school. Even Tyrone's age is unclear. Although he struts like a teenager, solves algebraic equations and towers over kindergartners, the books his teacher recommends—among them and —suggest an audience of five- or six-year-olds, and indeed, when the class gathers at Miss Libro's knee for story hour, they appear to be first-graders.

Brunkus's participation notwithstanding, the authors are not willing to let Tyrone be disobedient and difficult the way Junie B. Jones can be. They don't really want him to do his own thing with that pig. Theirs is a world where everything is in its place. Tyrone's mother gardens, his father plays catch, and his genius friend looks like a nerd. In the books his teacher reads aloud, princes save princesses. On opening day, the bulletin board promotes good manners, and the central display in the classroom is always a list of rules: always raise your hand, follow all directions. As Tyrone comes to love books, he loses his spunk, taming the pig of his bad manners—and personality—just as the school has tamed him. Tyrone turns from the class clown to the bearer of moral lessons. In the end, this is the book's central problem. In its world of regiment and order, there is never room for a wild rumpus.