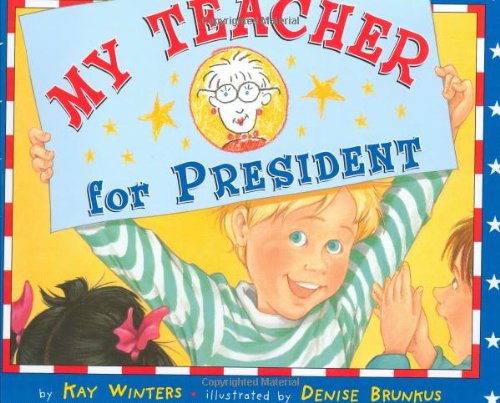 MY TEACHER FOR PRESIDENT

Inspired by TV reports about the upcoming presidential election, a second grader named Oliver catalogues why his beloved teacher, Mrs. Robbins, is ideal for the job. The fun arises from the way Brunkus (the Junie B. Jones books) visually structures the book. On the left side of each spread, she offers a snapshot, framed in a lined-paper border, of Mrs. Robbins (who resembles a slimmed-down version of Barbara Bush) navigating a typical school day with aplomb; on the right, a realistically rendered full-bleed picture shows how President Robbins would apply the same talents and experience to leading the nation. "She's used to being followed everywhere," reports Oliver, as Mrs. Robbins leads a slightly unruly line of students down the hall (posters of past presidents decorate the walls). On the opposite page, President Robbins jogs with her dog, surrounded by an entourage of media people and secret service agents. In a nifty added touch, the artist depicts Oliver as President Robbins's bow-tied but still kid-size aide de camp. But Oliver's nomination has one condition: "Just make sure she doesn't leave before the end of the year." Winters's ( ) narrative—set in type that appears handwritten—retains a second-grader's simplicity, directness and idealism ("She finds jobs for people.... She believes in peace"). The result is unexpectedly poignant, capturing how unflappable, dedicated teachers such as Mrs. Robbins are commanders-in-chief of not only their classrooms but also their students' hearts. Ages 5-up.