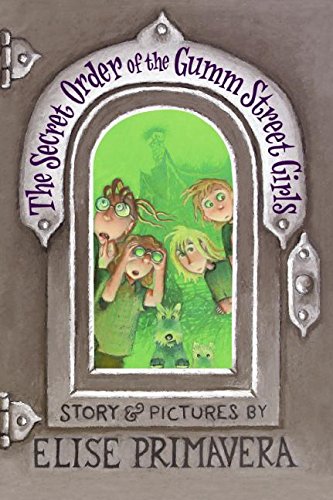 Primavera ( ) takes her time getting to the heart of her tale, narrated by a humorous yet disarmingly wise omniscient narrator. In the town of Sherbet, four girls ("all about ten or eleven years old") live on Gumm Street: prudent Prudence Gumm, bookish and severe; Franny Muggs, voyeur and daredevil; Cat Lemonjello, whose mother wrote a hipster version of the I Ching ("Darkness is coming at you, dude"); and Ivy Diamond, new to the neighborhood, whose broken-mirror-imposed seven years of bad luck are soon to be up. Ivy holds the key to the story; piano teacher Mr. Staccato (who claims to be 122 years old) tells her that she is the rightful heir of two red shoes—laced with mystical powers and tied to Hollywood's production of (Judy Garland fans will appreciate the coy use of her given name, Frances Gumm). When a fierce storm rips through town, the girls find themselves facing a wicked witch named Cha Cha who wants those shoes. From there it's a postmodern, surreal reworking of Baum's classic, significantly buoyed by the author's cheerful pen-and-inks, which recall the work of Jules Feiffer. In a nod to the Hogwarts hierarchy, the girls' school is divided into four houses, each named for one of the founder's favorite sandwiches, and instead of a sorting hat, a "large glowing computer" puts the girls where they will "find [their] unique talent." Despite the author's overriding emphasis on humor, Primavera is at her best in occasional flashes of poignancy—as in the omniscient narrator's breathtaking passage about the emotional power of family heirlooms. Ages 8-12.