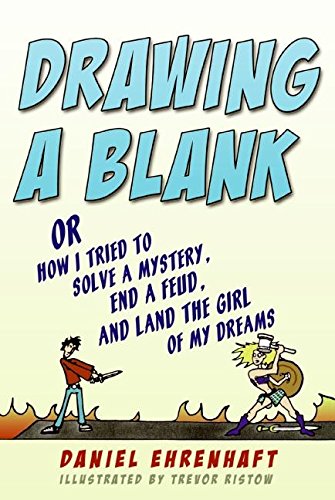 Carlton Dunne IV, 16, is rich in material wealth, poor in social skills. The subtitle—"Or How I Tried to Solve a Mystery, End a Feud, and Land the Girl of My Dreams"—hints at how events will unfold. With Carlton's mother long dead, his wealthy father has shipped him from Manhattan to a Connecticut boarding school, where Carlton retreats into self-acknowledged misanthropy, living vicariously through , a comic strip chronicling the adventures of a buxom crime fighter that he pens for a local newspaper. His life—spent hunched over his sketch pad—is upended when an evil Scottish rival kidnaps his father and Carlton must rescue him. At the airport, a gorgeous female stranger saves Carlton from becoming roadkill; her moxie parallels the derring-do of Carlton's comic super-heroine. Of all the implausibilities in this entertaining, if overlong farce, the most unbelievable aspect might be that an aspiring graphic novelist like Carlton would write 300-plus pages of text. More of Ristow's pen-and-ink drawings, interspersed irregularly throughout the narrative, might have helped the pacing, which sags at times. Ristow's panels could also have served to carry the plot points instead of simply mirroring the events of the narrative. That said, the short chapters, abundant one-liners and Carlton's engaging, self-deprecating narration make this a fun, light read. Ages 12-up.