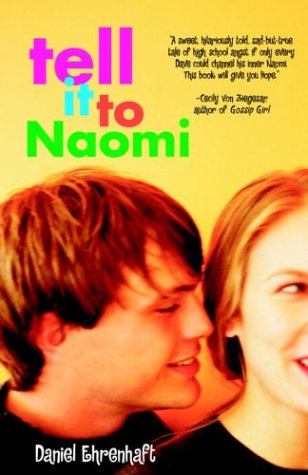 TELL IT TO NAOMI

Full of pep and laugh-aloud humor, this New York City–based novel relates the travails of narrator Dave Rosen, member of the "species [of]... puny, skinny, and awkward" sophomore boys at Roosevelt High. At first, Dave is eager to pose as his big sister, Naomi, an unemployed journalist who's been asked to pen an advice column for the school newspaper. He's well prepared to deal with the woes of his mostly female readers, since he always has been surrounded by women—his single mother and aunt as well as Naomi.("My mom and Aunt Ruth inhabit a bizarre parallel universe where a woman can be both celibate Jewish ogre and funky, aging hippie—and there is no contradiction," he says with typical acerbity.) However, Dave soon finds out that leading a secret life as a wise and witty columnist isn't all that it's cracked up to be. For one thing, he has trouble distinguishing the phony letters he receives from the sincere ones. Also, by keeping his identity a secret, he misses his chance to impress the "beautiful" and "mysterious" new senior, Celeste. By the time Dave realizes that honesty really is the best policy, he owes apologies to a long list of people. Once again, Ehrenhaft (as Daniel Parker, author of the first three Wessex Papers novels) showcases snappy dialogue and an impeccable sense of timing. Readers will gleefully follow Dave into and out of his amusingly complicated web of deceit. Ages 12-up.