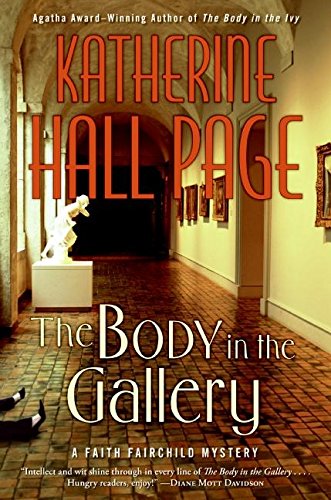 The Body in the Gallery: A Faith Fairchild Mystery

Is it art or murder? In Page's savory 17th Faith Fairchild mystery (after 2006's ), the caterer/chef uncovers sinister doings at the Ganley Museum of Art in Aleford, Mass. When Faith's friend Patsy Avery, the president of the museum's board of trustees, asks her to investigate a potential forgery, Faith is reluctant to jump back into the detecting world. She finally agrees to open a cafe in the museum at Patsy's urging, but soon discovers a bald female corpse floating in a tank intended for an art installation. Faith's subsequent investigation reveals that the woman, who called herself “Tess Auchincloss,” had a stolen Degas sketch stashed in her apartment. Joining forces with Det. Lt. John Dunne, Faith scrambles to solve the case even as the list of suspect grows and another murder occurs. Along with fun foodie details, Page provides an entertaining subplot involving Faith's rebellious teenage son, Ben.