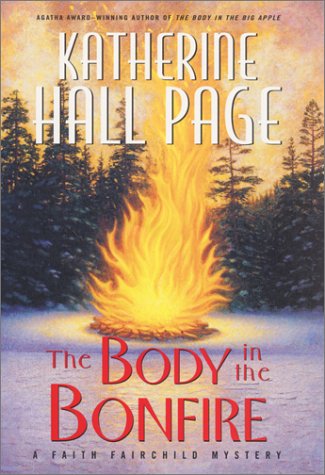 THE BODY IN THE BONFIRE: A Faith Fairchild Mystery

Despite three brutal murders and some ugly racial prejudice in this 12th mystery to feature amateur sleuth Faith Fairchild, Agatha Award–winner Page (, etc.) keeps the tone light as her heroine reflects wittily on the quotidian challenges of being the wife (and daughter) of a clergyman, the mother of two young children and the head of her own catering business. At Mansfield Academy, a not-so-elite boys' boarding school in a small town outside Boston, someone is harassing black student Daryl Martin, a top athlete and scholar. Faith's friend Patsy Avery calls her in to find out who's responsible for the hate-filled e-mail, offensive newspaper clippings and—finally—a noose left on Daryl's pillow. Under the cover of teaching a cooking class during winter project term, Faith searches for clues. At the same time, students and maintenance crew build a gigantic pyre for the school's annual bonfire. Faith is sure she's identified the harasser, Sloane Buxton, the aristocratic and handsome leader of a campus clique. When Sloane's corpse turns up in the smoldering embers of the bonfire, suspicion falls on Daryl. The harried headmaster, meanwhile, who rescued Mansfield from bankruptcy years before by buying it, has a lot of explaining to do to concerned parents. With recipes of the dishes Faith prepares in her cooking class in an appendix, this whodunit provides fully satisfying fare for a cold winter's night around the fire.