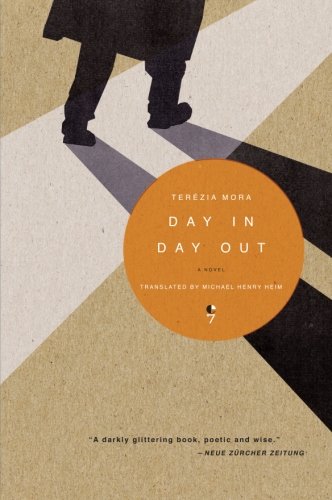 Day In Day Out

Hungary-born Mora centers her first novel on a young Balkan man who is rejected when he makes a pass at his boyhood friend on their graduation day. Abel Nema next leaves his Balkan hometown to seek the father who abandoned the family six years previously. In the unnamed city of his father's birth, Abel is hit by a car, and acquires a talent for language. Meanwhile, war breaks out at home, and rather than return to likely conscription, Abel goes on to a city called only “B.,” methodically masters 10 languages in a university language lab (with “no accent, no dialect, nothing... like a person from nowhere”), picks up young boys and is aided by various people attracted to his good looks. Most prominent among them is a woman named Mercedes, who hires Abel to tutor her young son, Omar. A jarring collage of free and direct voices and perspectives comprises the imaginative narrative, which culminates in a surrealistic delirium in which Abel confronts his past. An grayness dominates the proceedings, and the book's take on being gay doesn't have much in common with U.S. norms or conflicts.