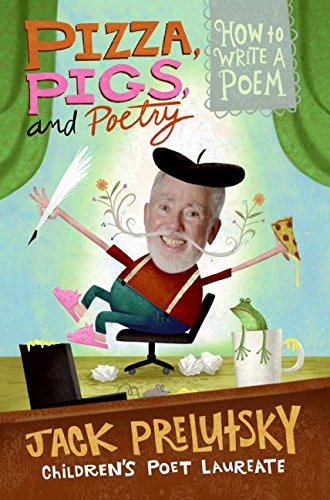 Pizza, Pigs, and Poetry: How to Write a Poem

Although Prelutsky's ( reviewed above) popularity and his role as the first children's poet laureate will excite hopes for this primer, his advice on writing poetry is limited and disorganized, albeit presented in his usual gleeful voice. He arranges his book in sections that each include an anecdote (“My Father's Underwear,” “An Awful, Awful Meal”) followed by the poem or poems inspired by the experience and a lengthy “Writing Tip.” However, he repeats much the same advice regardless of the ostensible topic. Prelutsky tells would-be poets to keep a notebook and/or to make lists in at least 10 sections; he counsels them to “exaggerate” in five. Sometimes the writing tip offers directions for a specific poem (“Write about your mother's rules and... why they drive you crazy”). A few of Prelutsky's assertions may raise some eyebrows (“A poem doesn't always have to be about something. You're allowed to write a poem about pretty much nothing at all,” he opines, going on to say that sound can be as important as meaning), and for the most part his tips, appropriately, apply only to humorous poems. While this is not a book for teachers seeking a comprehensive guide, readers looking for the story behind a particular Prelutsky verse will enjoy the book, as will kids who want to try on Prelutsky's style. Ages 7-10.