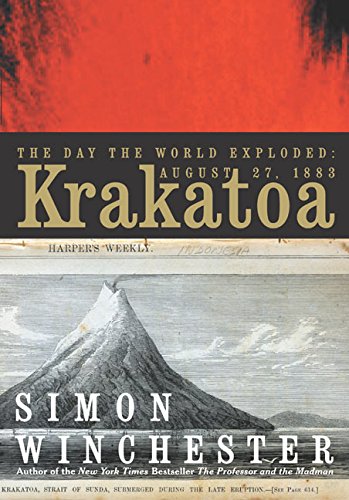 An erudite, fascinating account by one of the foremost purveyors of contemporary nonfiction, this book chronicles the underlying causes, utter devastation and lasting effects of the cataclysmic 1883 eruption of the volcano island Krakatoa in what is now Indonesia. Winchester (; ) once again demonstrates a keen knack for balancing rich and often rigorous historical detail with dramatic tension and storytelling. Rather than start with brimstone images of the fateful event itself, Winchester takes a broader approach, beginning with his own viewing of the now peaceful remains of the mountain for a second time in a span of 25 years—and being awed by how much it had grown in that time. This nod to the earth's ceaseless rejuvenation informs the entire project, and Winchester uses the first half of the text to carefully explain the discovery and methods of such geological theories as continental drift and plate tectonics. In this way, the vivid descriptions of Krakatoa's destruction that follow will resonate more completely with readers, who will come to appreciate the awesome powers that were churning beneath the surface before it gave way. And while Winchester graphically illustrates, through eyewitness reports and extant data, the human tragedy and captivating scientific aftershocks of the explosion, he is also clearly intrigued with how it was "a demonstration of the utterly confident way that the world, however badly it has been wounded, picks itself up, continues to unfold its magic and its marvels, and sets itself back on its endless trail of evolutionary progress yet again." His investigations have produced a work that is relevant to scholars and intriguing to others, who will relish it footnotes and all.