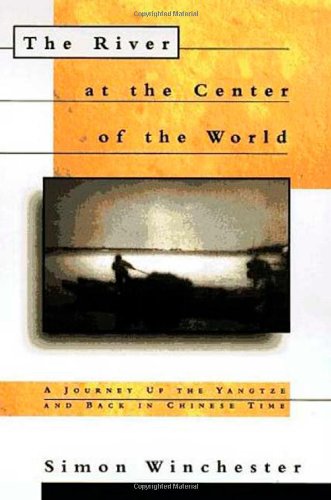 River at the Center of the World

""The delicious strangeness of China,"" as Winchester puts it, is as much the subject of this absorbing account of a personal journey as is the Yangtze River, the third-longest in the world and the entry to China's heartlands. Along its banks, some of the most important events in the country's history have played out, and the river occupies a singular place in the national psyche. In 1994, Winchester followed its course from the East China Sea to Tibet by boat, car, train, plane, bus and foot; but this is more than an ordinary account of a traveler's pilgrimage, although it is a must for any visitor to China. Wryly humorous, gently skeptical, immensely knowledgeable as he wends his way along the 3900 miles of the great river, Winchester provides an irresistible feast of detail about the character of the river itself, the landscape, the cities, villages and people along its banks. Most notably there is Shanghai, once ""the most sinful city in the world,"" now an economic powerhouse rivaling Hong Kong; Wuhan, where the 1910 revolution began that brought Dr. Sun Yat Sen to power and where Mao Ze Dong, at 70, chose to make his famous swim; the Three Gorges, where a great, controversial dam to rival Aswan is being built; and Chongquin, once Chiang Kai-shek's smoggy and furnace-hot capital. Finally, Winchester made his way to the great river's source 15,000 feet high in the mountains of Tibet. A journalist who has written extensively about Asia (Pacific Rising; The Sun Never Sets) and spent nine years in Hong Kong making frequent visits inland, Winchester is comfortable with the country's long, complex history and politics, and he writes about them with an easy grace that defies the usual picture of China as an enigma wrapped in a conundrum. (Nov.)
close
Details