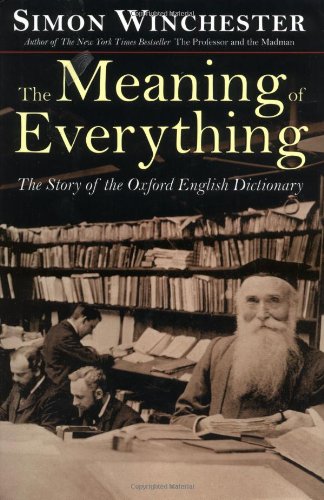 THE MEANING OF EVERYTHING: The Story of the Oxford English Dictionary

With his usual winning blend of scholarship and accessible, skillfully paced narrative, Winchester () returns to the subject of his first bestseller, to tell the eventful, personality-filled history of the definitive English dictionary. He emphasizes that the OED project began in 1857 as an attempt to correct the deficiencies of existing dictionaries, such as Dr. Samuel Johnson's. Winchester opens with an entertaining and informative examination of the development of the English language and pre-OED efforts. The originators of the OED thought the project would take perhaps a decade; it actually took 71 years, and Winchester explores why. An early editor, Frederick Furnivall, was completely disorganized (one sack of paperwork he shipped to his successor, James Murray, contained a family of mice). Murray in turn faced obstacles from Oxford University Press, which initially wanted to cut costs at the expense of quality. Winchester stresses the immensity and difficulties of the project, which required hundreds of volunteer readers and assistants (including J.R.R. Tolkien) to create and organize millions of documents: the word was left out of the first edition because its paperwork was lost. Winchester successfully brings readers inside the day-to-day operations of the massive project and shows us the unrelenting passion of people such as Murray and his overworked, underpaid staff who, in the end, succeeded magnificently. Winchester's book will be required reading for word mavens and anyone interested in the history of our marvelous, ever-changing language.