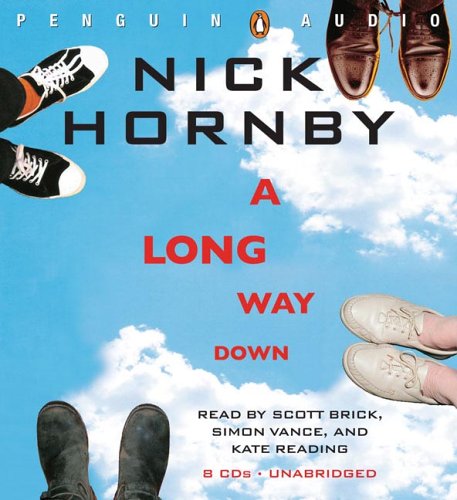 A Long Way Down

More than just a reading of Hornby's fourth novel, this audiobook is nearly an audio play with three excellent actors playing four characters. A famous pervert, an old maid, a crazy chick and a has-been rocker walk into a bar... well, they eventually do walk into a pub or two, but this disparate group of strangers first meet on a tower rooftop. Each of the quartet has independently decided to jump on New Year's Eve. Now, bonded by circumstance, they can't get rid of each other. Vance does a superb job rendering the glib tones of Martin, the TV anchor fallen from grace (he did jail time for having sex with a 15-year-old). His pompous but self-loathing delivery is dead on. Brick, with more than 150 audiobooks under his belt, perfectly nails the earnest voice and cockiness of J.J., the washed-up American rocker. And Kate Reading is outstanding playing both female characters. As Maureen, the older woman with no social life, she exudes quiet, naive dignity, but she really shines as Jess, the young wacko whose rudeness and rebellion are conveyed with a brash comical snap.