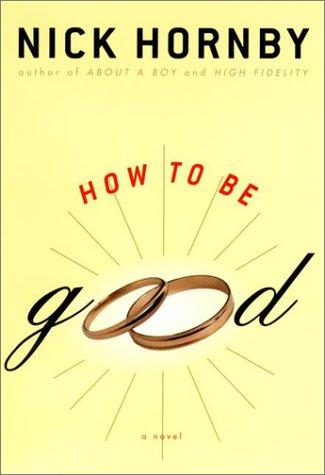 "Good" characters in novels are notoriously hard to create, not because goodness is uninteresting, but because when it's uncontaminated by self-interest it isn't plausible, especially in a comedy. In Hornby's (; ) hilarious novel, the problem of goodness is dumped on Dr. Katie Carr. After more than 20 years of marriage and two children, Katie has had it: she's having an affair, feels intellectually dull and wishes her husband, David, would turn into a different person. Unfortunately for her, she gets her wish when David, a bitter, semi-employed intellectual who writes a column for a local newspaper subtitled "The Angriest Man in Holloway," becomes a secular saint. To spite her after an argument in which she suggests that they divorce, he goes to a dreadlocked faith-healer named DJ GoodNews. When GoodNews lays his hands on David, he suddenly becomes loving, concerned and utterly humorless. He gives money away, stops writing his column, organizes housing for the homeless (inconveniently enough, with neighbors whose houses have empty rooms) and invites GoodNews to move in. David donates the children's surplus toys to charity and asks them to adopt the uncool kids at school as their friends; their son, Tom, hates this, but his sister, Molly, develops an alarmingly patronizing friendship with a smelly little girl named Hope. Just how will Katie handle being surrounded by all of this horrible goodness? Hornby relies less than usual upon pop references—which would be inappropriate for Katie's character anyway, although Homer Simpson is invoked a few times—but he has created, without them, a very funny agon of liberalism.