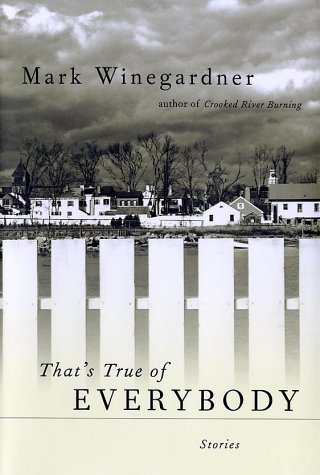 THAT'S TRUE OF EVERYBODY

Laced with acid wit and withering realism, the 13 stories collected here describe lives of aimlessness and muted disaster in the Midwest. In a section called "Tales of Academic Lunacy: 1991–2001," Winegardner (; ) satirizes bureaucratic hijinks at a small college with great humor but only middling originality. In "Keegan's Load," a poet who has self-published all his poems receives an endowed chair and a cushy course load; in "The Visiting Poet," a teacher who seduces bohemian female students is exposed but ultimately given tenure and a significant pay raise. Elsewhere, individuals wander from psychological trough to trough without ever collapsing completely, sometimes even achieving triumphs. The burned-out radio sportscaster who narrates "Halftime" leads a life so unsatisfactory that he can't even keep himself awake at the wheel of his car—although his drowsiness is partially a medical condition, its metaphorical aspect looms over the story like a hungry python. In "Rain Itself," a gigantic young teenager working as a landscaper bests a bullying co-worker in a perverse game of "chicken" played out on a bridge over a railroad track—a small victory in a simple life. In "Travelers Advisory," a maladjusted young woman goes to a job interview in a blizzard instead of attending her father's memorial service, atoning by leaving messages on her father's answering machine. The homey, relaxed voice telling the stories is one you've probably heard before—while it is readable, it becomes rather monotonous. These lyrical, down-to-earth tales of loss and emptiness in the heartland could probably have reached farther—but then again, so could their characters.