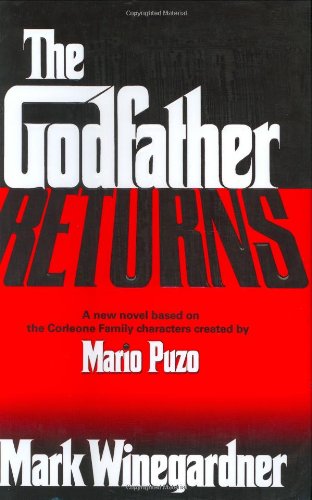 When Random announced that Winegardner, best known for the critically acclaimed mainstream saga and baseball novel , had been hired to write a fresh Godfather novel, eyebrows arched from coast to coast. But the decision was right: this is a phenomenally entertaining, psychologically rich saga that spans the entire years imagined in novel and film by Mario Puzo (the latter via his screenplays), filling in the blanks, fleshing out the characters, focusing primarily on the time (mid 1950s-early '60s) between when Puzo's landmark novel ended and the film begins.

Few remember that Puzo began his career as a commercially failed but critically celebrated literary novelist. He wrote with the aim of hitting bestseller lists, but his earlier training showed in that novel's reach and complexity. Just so, Winegardner brings enormous talent to bear on this popular story and its immense cast of characters, deepening Puzo's work at nearly every step. Fredo Corleone, hapless Mafia scion, emerges here as a more central, vigorous and conflicted character than in or even the films, as do Tom Hagen (the Corleones' adopted son and erstwhile consigliere) and Johnny Fontane, Puzo's dig at Frank Sinatra. There are many new and newly fleshed out characters as well, from assorted Mob bosses (most notably Chicago's Don Louie Russo, aka Fuckface, spiritual descendant of Al Capone, and Nick Geraci, a Corleone man destined to become the Corleones' arch-enemy) to various Corleones (most notably the slain Sonny Corleone's twin daughters). There are also sharply drawn cameos of, among others and by other names, JFK, RFK and, fleetingly, Andy Warhol. But at the center of the mesmerizing, sometimes dizzying Mob conspiracies and familial tensions is, of course, the Godfather, Michael Corleone—proper heir to Vito Corleone, the last : devious, brilliant, astonishing ruthless.

The book isn't perfect—just nearly so. The enormity of Winegardner's reimagining of Puzo's epic can obscure the novel's overarching story line—Michael's attempt to legitimize the Corleones' businesses—and leads at times to an episodic feel. These, however, are quibbles in the face of a wholly absorbing novel that's written beautifully, with great skill and passion. fans will love this tale; Puzo himself must be raising a celestial glass and shouting a hearty "Salut'!" Let it be known that Winegardner, for his respect to the novel's antecedents and for his accomplishment, shall henceforth be known as a Man of Honor.