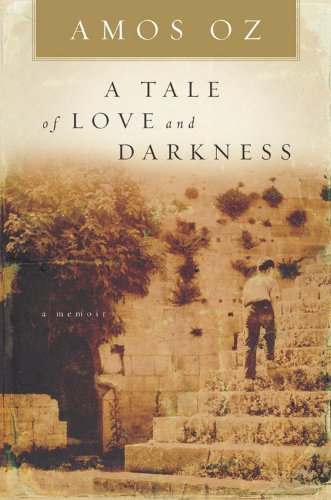 A TALE OF LOVE AND DARKNESS

This memoir/family history brims over with riches: metaphors and poetry, drama and comedy, failure and success, unhappy marriages and a wealth of idiosyncratic characters. Some are lions of the Zionist movement—David Ben-Gurion (before whom a young Oz made a terrifying command appearance), novelist S.Y. Agnon, poet Saul Tchernikhovsky—others just neighbors and family friends, all painted lovingly and with humor. Though set mostly during the author's childhood in Jerusalem of the 1940s and '50s, the tale is epic in scope, following his ancestors back to Odessa and to Rovno in 19th-century Ukraine, and describing the anti-Semitism and Zionist passions that drove them with their families to Palestine in the early 1930s. In a rough, dusty, lower-middle-class suburb of Jerusalem, both of Oz's parents found mainly disappointment: his father, a scholar, failed to attain the academic distinction of his uncle, the noted historian Joseph Klausner. Oz's beautiful, tender mother, after a long depresson, committed suicide when Oz (born in 1939) was 12. By the age of 14, Oz was ready to flee his book-crammed, dreary, claustrophobic flat for the freedom and outdoor life of Kibbutz Hulda. Oz's personal trajectory is set against the background of an embattled Palestine during WWII, the jubilation after the U.N. vote to partition Palestine and create a Jewish state, the violence and deprivations of Israel's war of independence and the months-long Arab siege of Jerusalem. This is a powerful, nimbly constructed saga of a man, a family and a nation forged in the crucible of a difficult, painful history.