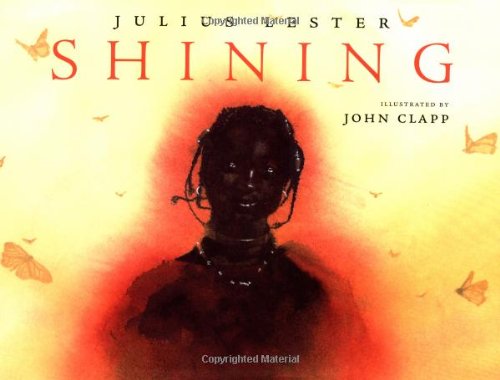 As he writes in an introductory note, Lester ( ) explains that just as a composer creates variations around a musical theme, this story is "a set of variations around the theme of the color black," and that he has aimed to create figures of speech that associate black with "goodness and beauty." In this goal he succeeds; however, his story feels more cryptic than intriguing. In a mountain village, a baby is born who is "black as wisdom." Since "she is so black her skin shines bright like the sun," she is called Shining. But the baby makes no sounds at all and remains silent as she grows older. Fearing that "an evil spirit has taken her voice," Shining's mother carries her into the forest to find "The One." The latter whispers to Shining that she will meet her "on the other side of Silence." Much later, after the village has punished the mute girl, The One anoints Shining as her successor, whereupon the girl utters a "wordless song as soft as blackness." Making striking use of light, shadow and splashes of vivid color, Clapp ( ) mixes abstract and realistic styles to capture the tale's mystery and emotion. Some of Clapp's work demonstrates extraordinary proficiency, e.g., a portrait of tiny Shining held by her mother as they make their way through an almost pitch-black forest. But there is little in either the art or the text to welcome a child's imagination. Ages 6-9.