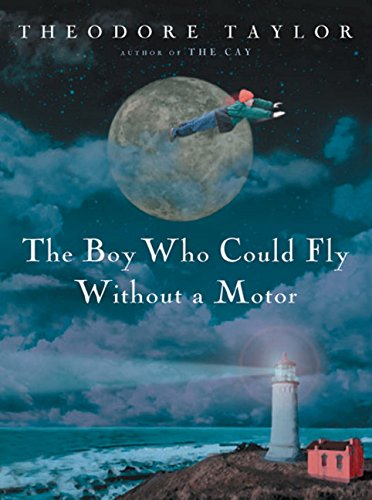 THE BOY WHO COULD FLY WITHOUT A MOTOR

Set in 1935, Taylor's () slim yet whimsical tale introduces lonely nine-year-old Jon, the son of the lighthouse keeper on remote Clementine Rock off the California coast. Possessing "an imagination as broad as the sweep of the light," the lad sometimes hears the moaning of ghosts of passengers who died when their ships allegedly crashed on the rock, among them the , a vessel carrying Chinese laborers to San Francisco in 1850. To combat his loneliness, the boy begins to practice telepathy after reading about it in , beseeching anyone listening to send him "advice on how to body fly" so he can escape the tiny island. Ling Wu, the pompous ghost of a magician aboard the , sent by the Manchu dynasty to entertain the laborers, answers his call. He teaches Jon how to use his brain cells to levitate yet makes him promise he will never reveal the secret "on threat of being boiled in dragon's bile." Though the child initially practices within the confines of his room, one night he flies out over the ocean, where he's spotted by the shocked crew of a fishing trawler. This sighting precipitates a government investigation, culminating in Jon demonstrating his skill to FDR, other officials and the media at the White House. A facile denouement brings the narrative down to earth a bit abruptly. But Taylor's tight writing and flair for the fanciful otherwise keeps this caper agreeably airborne. Ages 8-12.