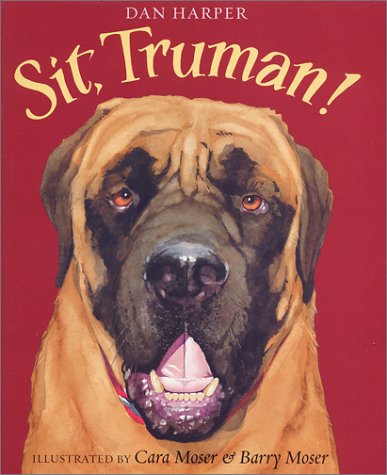 One of the most engaging pooches to hit picture books since Alexandra Day's Carl, the mastiff Truman is one big bundle of affection and drool. The compelling cover (an irresistibly expressive head shot) makes it clear that Truman is no ordinary pup, while the opening scene confirms it: "Truman, sit!" accompanies an illustration of the humongous pooch attempting to shake paws instead. The trio that engineered quickly sets the stage for entertainment with such props as a "Super Slobber" water bowl and drool rags. Whether poking his head into the mailbox ("Sorry, Truman, nothing for you") or standing guiltily next to a toilet ("Truman, that is not your water bowl"), it's abundantly evident that Truman is a handful. Equally fetching is Truman's tiny companion pup, Oscar, who adds comic relief in the form of contrast (such as the giant hero's bemused attempt to fit into Oscar's bed). Harper's wry, minimal text plays straight man to the father-daughter Moser team's illustrations, a series of exquisitely pellucid watercolors that wring every ounce of humor (and moisture) from Truman and his exploits. This winning tale should enthrall a wide range of ages, from (human) lap-sitters to canine-crazy adults. Ages 3-7.