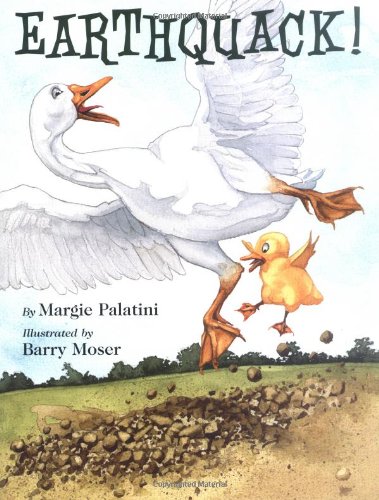 Earthshaking rumblings make for a skittish duckling (and other nervous farm animals) in this somewhat long-winded variation on the Henny Penny theme. After completing his morning laps, a jittery Chucky Ducky fervently attempts to warn the other skeptical and pun-fully named animals (e.g., Lucy Goosey, Sue Ewe, Billy the kid) of what he's sure is an earthquake ("He heard the ground grumble. He felt the ground rumble"). "Oh, it can't be that baa-ad," retort the lambs while the pig grunts, "Hogwash!" Several lengthy episodes of earth crumbling and animal tumbling pass before a hungry weasel (sporting a white coat and masquerading as Herman Ermine) provides a refreshing detour—and real tension—to the story. Moser's () realistic watercolors play up the climax, as they place the large, expressive characters front and center against mostly white backdrops that darken when the lip-licking weasel hits the scene. Palatini's () frequently rhyming and sometimes clichéd prose dabbles in cultural references that may elude younger readers (Joel and Lowell Mole, who cause the earthshaking commotion while looking for their cousin, Garret Ferret, ask, "Does anybody know the way to San Jose? We think we took a wrong turn at the Lincoln Tunnel"). Children may be left scratching their heads as the tale concludes that Chucky Ducky, "right from the beginning, was all wet." Ages 4-8.