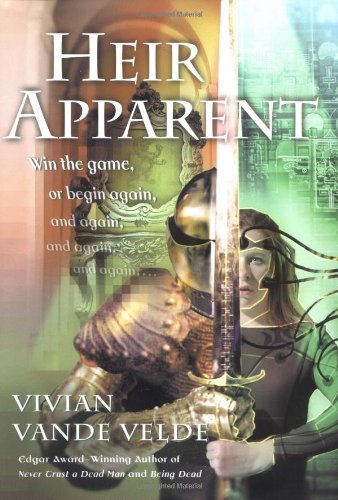 Vande Velde () establishes a clever premise for this consistently entertaining fantasy novel. When Giannine arrives at the virtual reality arcade, the organization Citizens to Protect Our Children is protesting out front (their signs bear such messages as inappropriate for children and magic = satanism). Giannine goes in anyway, choosing to play Heir Apparent. In it, she assumes the role of shepherd Janine de St. Jehan, illegitimate daughter of the late king, and she will become the new king if she can survive constant threats, including potential warfare and perhaps even a dragon. For Giannine, the stakes are raised when a man claiming to be the arcade's CEO appears in her game, telling her that the CPOC protestors have vandalized the equipment: Her only way out of the game is to successfully complete it—and quickly, or she risks "fatal overload." The story line is ingeniously developed; each time Giannine's character "dies," Giannine must start back at the beginning, making more informed choices and using her developing diplomacy to prevent a war with barbarians, or win over the royal troops. It can be a little hard to keep track of all the people and the plotting, but hilarious characters (like a sweet-talking barbarian king and a centipede-eating wizard) plus fantastical elements (e.g., a hat that "lets you avoid the time stream [so you can] keep moving when all about you is still") will spur readers on toward the satisfying conclusion. Ages 8-12.