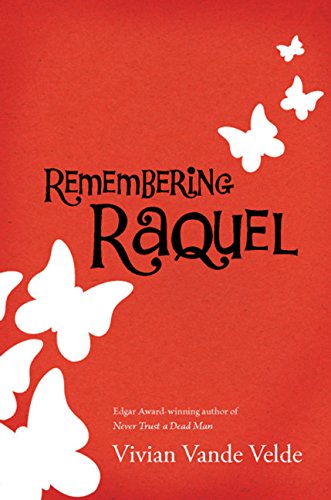 Edgar Award–winning Velde ( ) covers well-traversed ground in this slender novel about a 14-year-old girl who is killed by an oncoming car after seeing a movie. Various people who knew the victim—or who think they did—narrate different chapters, slowly revealing aspects of Raquel’s personality and the circumstances of her death. While some chapters offer insight into Raquel’s misunderstood, loner-esque character (particularly those by her longtime best friend) others present fish-in-a-barrel ironies. Alpha girl Stacy Galbo, who has “admittedly good blond hair, green eyes, and a figure [she’s] not ashamed of,” assumes that Raquel, who was heavy and not popular, found her fate tragic: “being her, while wanting to be me—surely she stepped into the path of that car on purpose.” Mara Ravenell, identifying herself as “the acknowledged expert at Quail Run High when it comes to petitions... or any other kind of social activism,” plans to use Raquel’s death as the cornerstone of her campaign for safer streets—either that or raise money to buy oxen for the underprivileged in Africa. A few passages are poignant, as in the bewildered confession by the driver of the car, but cynicism and more irony work their way into moments that readers might expect to have emotional depth, as in Raquel’s father’s recollection of Raquel’s behavior during her mother’s fatal bout with cancer. While this probe doesn’t get much past the surface, it builds up a gloss, hard and shiny, that many teens may find attractive. Ages 12-up.