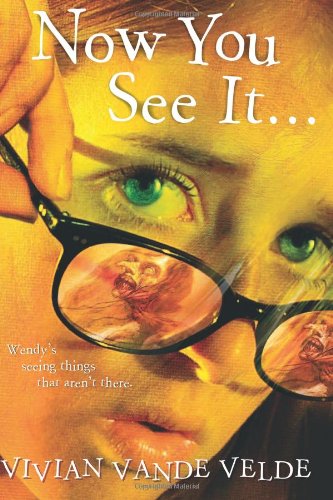 An utterly likable narrator gives a boost to Vande Velde's ( ) charming and funny fantasy. Fifteen-year-old Wendy is plucky and upbeat despite having a "figure like a duffel bag" and being practically blind without her glasses. When a bully breaks her glasses at school, she resorts to wearing a pair of prescription sunglasses she found on her lawn—which, coincidentally, are a perfect match for her eyes. But the glasses do more than let her see: when she wears them, dead people talk to her, and Tiffanie, the prettiest girl in school turns into "the ugliest person in the world." The spectacles also reveal portals to a parallel world, one in which two elf brothers fight for the throne—and the son of one of them is living in the human world as Julian, on whom Wendy might just have a crush (though her glasses reveal his long, pointed ears). A time portal introduces her to her grandmother as a girl, who joins Wendy in her effort to rescue the recently imperiled Julian; they are aided by Tiffanie (the beautiful/ugly girl from Wendy's class), who turns out to be anything but a normal student. The plot playfully wanders all over the map; readers will likely get just as much enjoyment from Wendy's sly and self-deprecating humor as from the whimsical adventure itself. Ages 12-up.