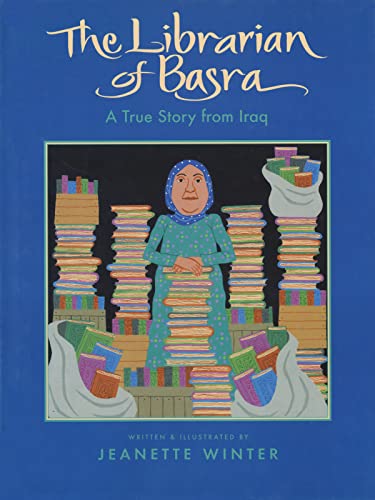 THE LIBRARIAN OF BASRA: A True Story from Iraq

Relaying the same story told in (reviewed below), Winter ( ) deftly pares down for a picture-book audience the events surrounding Alia Muhammad Baker's courageous book rescue mission in Basra, Iraq, in spring 2003 (see Children's Books, Dec. 13). She portrays the Basra library as a place where the community comes together not only to read books but to "discuss matters of the world and matters of the spirit." In a typically lyrical passage, the author notes, "Alia worries that the fires of war will destroy the books, which are more precious to her than mountains of gold." As spare yet penetrating as the narrative, Winter's boldly hued, acrylic and pen illustrations depict the frantic book salvaging effort against a bright orange and burnt sienna backdrop of bomb- and gunfire-lit skies—and the subsequent, heartbreaking library fire. A clever cross-section image of Alia's house shows the library volumes (which, readers learn in a concluding note, amounted to an astounding 70 percent of the collection) piled on every available surface. Graphically and textually shifting tone from the real to the idyllic, subsequent pages reveal Baker in a serene, dove-filled setting, where she waits for the war to end and dreams of peace and a new library. Winter, ever aware of her audience, mentions Alia's stroke only in the endnote, keeping her story to specifics that youngest readers can appreciate. All ages.