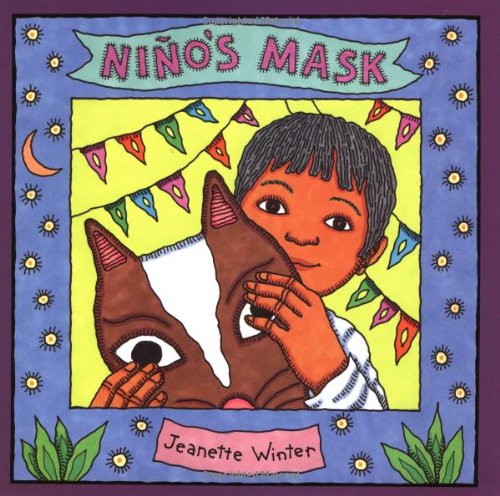 Winter (; ) revisits Mexico and its traditions in this chipper original tale. Niño dreams of playing a role in the annual village Fiesta of the Tigre (festival of the jaguar). "Can I wear a mask this year?" he asks his father, but the answer is always "When you are older, Niño." Not to be put off, the enterprising lad decides to carve his own mask. Should he be a (rabbit)? A (deer)? He finally settles on the hero role of (dog), who chases and catches the (a jaguar, "who would kill our corn," Niño explains). A series of panels shows the boy methodically carving and painting his mask. Niño has a grand time at the fiesta, and a climactic split spread depicts the perro closing in on the tigre; everyone acts surprised when Niño is finally unmasked. Winter neatly slots her crisp prose into speech bubbles, lending the outing an inviting look and a rapid pace. She laces the pages not only with Spanish words but with Mexican motifs (including vibrant designs on the townspeople's clothing). Winter punches up stylized south-of-the-border architecture with shades of fuchsia, turquoise and aqua, while setting off freshly plowed fields of mauve and melon with an orange sun rising in a rosy pink sky. A small glossary and brief illustrated endnote, explaining the role of masks in Mexican celebrations, further bolster this eye-catching book. Ages 4-8.