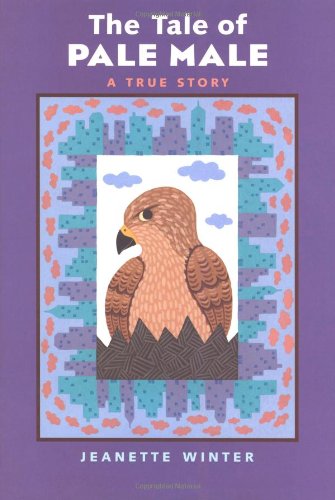 The Tale of Pale Male: A True Story

Winter's ( ) fluid, accessible narrative relays the true tale of two Red-tailed hawks that took up residence at the top of a Manhattan apartment building. Excited bird-watchers observe from the street as Pale Male and his mate, Lola, diligently build their nest behind spikes designed to keep pigeons away. Pale Male brings mother-to-be Lola mice and birds to eat, and the residents of the Fifth Avenue apartment below are hardly happy when the scraps land on their balcony. After hawk chicks hatch in the spring, they eventually learn to fly and to hunt on their own; they and their parents become local celebrities. Alas, "the apartment people," fed up with falling bones, surreptitiously arrange to have the hawks' nest (its sticks and twigs weigh 400 pounds) removed, inciting a protest ("Ah, victory!/ The watchers convince the apartment people/ to let the hawks build a new nest"). The tone of the tale breezily engages readers ("Will they fall?," asks the narrative as the fledglings attempt their first flight), who will be tickled to learn from a concluding note that the hawks—as of spring 2006—were still living in their outdoor penthouse. Winter's trademark spare, folk-art illustrations feature a pleasingly muted palette, befitting both the bird heroes and the cityscape. Ages 3-7.