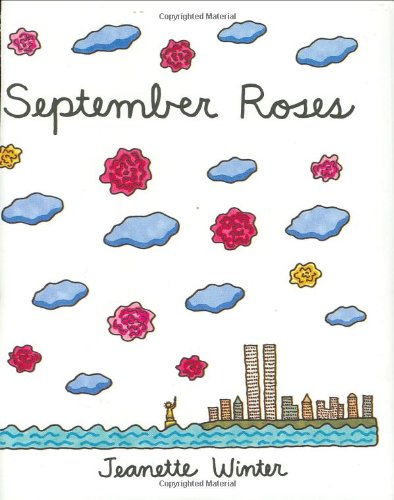 Winter's spare, understated narrative and deceptively simple illustrations belie the intense emotional impact of this handsize volume. The author's introductory note puts the story in a personal context: "At 8:50 a.m. on September 11, 2001, I looked up from my drawing table and saw in the distance an enormous plume of smoke rising high above and beyond the Empire State Building." Several days later, she explains, she went to Manhattan's Union Square "to be closer to the communal outpouring of anguish in the city," and makes reference to the roses she saw there.

The book itself tells the story of how these roses came to be in Union Square Park. A series of vignettes portrays two South African sisters who grow roses; the blossoms seem to engulf their cozy home and overtake their dreams. "Every night the sisters worked on designs for their rose display at the flower show, far away in New York City." A full spread depicts their plane approaching Manhattan, just as two others in the lower right hand corner are about to collide with the Twin Towers. The women arrive in New York on the morning of September 11, along with the 2,400 flowers they had planned to exhibit.

Black-and-white spreads convey news of the tragedy and the chaos at the airport where they are now stranded. A kind stranger offers the sisters shelter; in return, the women offer him their roses. The man takes the sisters to Union Square, where the only color in the scene comes from the candles lit to honor the dead. In small square panels, Winters shows the florists adding roses, one by one, until a full-spread composition reveals the women's arrangement of brilliantly hued blossoms into the shape of the fallen buildings.

Winter's effective use of color underscores the sense that simple acts of kindness can bring a ray of light to even the darkest day. Her sensitive portrayal, tinged with hope, makes this one of the most effective books—alongside Mordicai Gerstein's —with which to approach youngsters concerning this complex event. Ages 7-up.