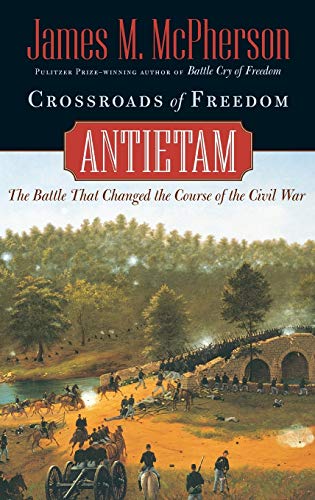 CROSSROADS OF FREEDOM: Antietam 1862: The Battle That Changed the Course of the Civil War

Contributing significantly to Oxford's new academic series Pivotal Moments in American History and to the literature on the Civil War, McPherson convincingly establishes the Battle of Antietam as the conflict's pivotal moment militarily, politically and morally. His depiction of the spring 1862 Confederacy shows it reeling under blockade while the North was learning how to practice "hard war." Yet McPherson tracks Robert E. Lee in the Seven Days' Battles and the Second Manassas campaign, placing him, by September, in Maryland and threatening Washington. Foreign nations were poised to recognize the Confederacy, and Lincoln had postponed his plans to liberate its slaves. With an election coming in November, demoralized Northern voters were in position to give control of Congress to a Democratic party with a vocal peace wing. The Union general George B. McClellan never took a risk he could avoid; on September 17, at Antietam, he failed to commit his full force, yet managed to get a defeated, demoralized army to the field at the end of the single bloodiest day in American history: over 6,000 men from both sides dead. Before the battle, McPherson carefully demonstrates (with the aid of 30 duotones and seven maps), the Civil War's outcome had been disputable. In Antietam's aftermath, Lincoln issued the Emancipation Proclamation. France and Britain discreetly backed away from recognition. The Republicans kept control of Congress and of most state governments. The war was now the Union's to lose.