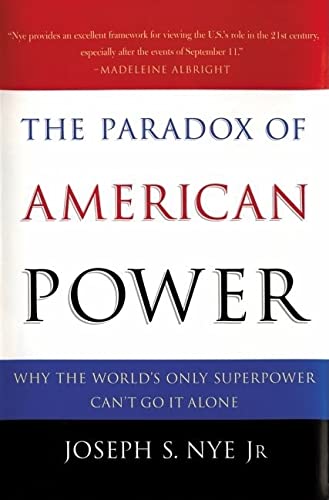 THE PARADOX OF AMERICAN POWER: Why the World's Only Superpower Can't Go It Alone

"Unilateralism, arrogance, and parochialism"—the U.S. must abandon these traits in a post–Sept. 11 world, says Nye, former assistant secretary of defense and now dean of Harvard's Kennedy School of Government. He explains eloquently the principles he believes should govern American foreign policy in the decades ahead. His starting point is the preponderance of American power in today's world. Nye distinguishes between hard power (military and economic strength) and soft power (openness, prosperity and similar values that persuade and attract rather than coerce others). Nye argues that a dominant state needs both kinds of power, and that the current information revolution and the related phenomenon of globalization call for the exercise of soft more than hard power. It is, Nye believes, dangerous for the U.S. systematically to opt out of treaties and conventions endorsed by the great majority of nations. The U.S. should participate in world debate on transnational issues such as global warming and nuclear defense, not simply declare American interests paramount to the exclusion of all other views. Nye quotes a summarizing insight from a French critic: "nothing in the world can be done without the United States, [A]nd... there is very little the United States can achieve alone." As the author points out, in the aftermath of September 11, the policy issues this book addresses are magnified rather than diminished in importance. This reasoned and timely essay on the uses of power makes a valuable contribution to American public discourse.