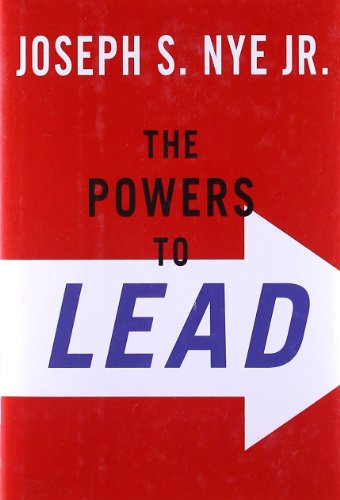 The Powers to Lead

Leadership gurus since Machiavelli have argued over whether a leader should be loved or feared. In this evenhanded primer, Nye, a professor at Harvard's Kennedy School of Government and “soft power” theorist, takes a resolute stand in between the two sides. Modern leadership, he contends, requires “smart power,” a judicious situational balance of “hard power” (getting people to do what you want, with carrots, sticks and bullying) and “soft power” (getting people to want what you want, with inspiration, charisma and propaganda). Nye embeds his argument in a lucid, if somewhat dry, survey of leadership studies, touching on everything from bonobo behavior to Freudian psychology, and illustrates it with references to noted leaders like former General Electric CEO Jack Welch, Lincoln, Hitler and Subcomandante Marcos. (George Bush's presidency provides a recurring object lesson in bad leadership.) The author takes a skeptical, down-to-earth view of leadership fads and hype. But he can't quite break free of mystical notions like “vision” or vague buzz concepts like “contextual intelligence” (a head-scratcher that boils down to “judgment” and “wisdom”); his “smart power” formula is therefore more truism than concrete guide to action. Nye's is a useful introduction to the theory, but not the practice, of leadership.