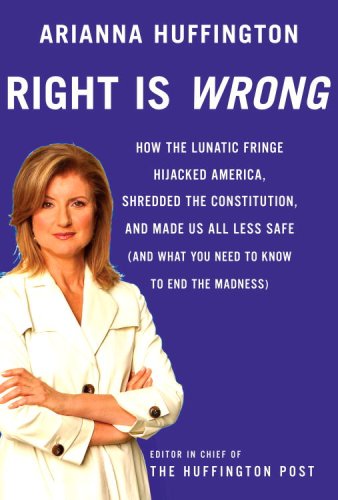 Right Is Wrong: How the Lunatic Fringe Hijacked America, Shredded the Constitution, and Made Us All Less Safe (and What You Need to Know to End the Madness)

Columnist Huffington unleashes her pen on the “far-right cowboys” and “lunatics” who, she says, are “running the Republican asylum” and—with the media’s help—threatening global safety, American security, health care and civil liberties. Her contribution to ongoing political debates offers well-rehearsed analyses parsing right-wing spin on the Iraq War, the justification for torture, global warming, immigration, stem cell research and health-care reform. Huffington’s sallies have no trouble finding the chinks in the armor of the Bush administration, neocons like Bill Kristol or right-wing media stalwarts like Ann Coulter. While this is a serviceable election-year playbook, Huffington’s populist stance may strike some as shaky given her relationship with the media she decries (she lambastes a television show for giving Ann Coulter a platform without adequately accounting for her own presence on the same program). Moreover, her distinction between the current radical right-wing leadership and Ronald Reagan’s GOP fails to account for the strong continuity in terms of policies and personnel and has more rhetorical appeal than historical merit.