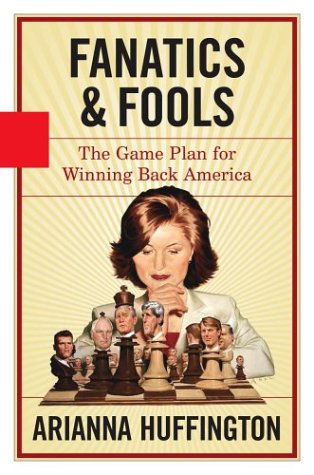 FANATICS AND FOOLS: The Game Plan for Winning Back America

Huffington's latest (after the bestselling ) gets off to a rocky start with a scattershot attack on the GOP that reads more like a disjointed assemblage of her syndicated columns than a sustained argument. Though she is capable of biting humor, this material all too often emphasizes weak attempts at humor over facts (most of which have already been covered in myriad other anti-Bush books). She takes several cheap shots, at Rush Limbaugh's drug addiction, for instance, and makes a tasteless crack about inducing premature births so the infants can count as campaign donors. As she shifts into discussing her short-lived candidacy in California's gubernatorial recall, however, Huffington gradually acquires gravitas and cohesiveness to such a degree that the second half of the book feels like a different work. Her detailed analysis of a Democratic leadership "in complete denial" is strong, and this is surely one of the few potentially bestselling political critiques this season to grapple with political philosophers like John Rawls and Leo Strauss. With an impassioned call for all Americans to give more than lip service to charitable impulses, and invoking the spirit of Robert Kennedy, Huffington assembles a multi-issue platform on which she hopes liberals and progressives can unite to unseat Bush in November. Capping a decade-long transformation from classic conservative to social progressive, Huffington effectively mounts an assault on both ruling parties and firmly rebukes any who would still challenge the seriousness of her political ambitions.