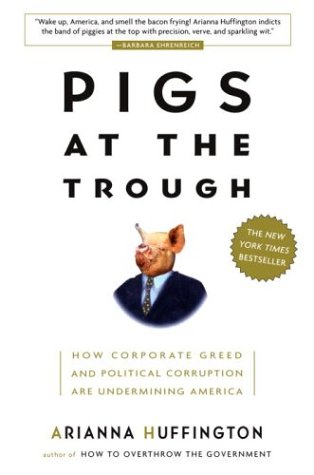 PIGS AT THE TROUGH: How Corporate Greed and Political Corruption Are Undermining America

Nationally syndicated columnist Huffington's greatest dilemma while writing this scathing indictment of the corporate and political culture that brought the "new economy" '90s crashing down must have been how to choose among the plethora of examples of greed, corruption, hypocrisy and political manipulation. So unsavory are the CEO villains, so unfathomable is their greed and monstrously callous is their disregard for the thousands of employees who lost jobs and savings because of them, that even the most worldly activist and most cynical political observers will be shocked by what they read here. And Huffington's indictment of the corporate culture of greed, one that she believes undermines democracy, goes far beyond the high-flying corporate figures featured in congressional investigations. Among her accusations are that U.S. drug companies allowed the African AIDS epidemic to rage in the interests of corporate profits, and that President Bush is a conspirator in the corporate disregard of the interests of the American public. This is a powerful book, brimming with wit and sulphurous satire that connects the dots among politicians, lobbyists and corporations, and demonstrates their destructive effect on the well-being of average Americans. She may well be on her way to achieving her goal of convincing readers "to join forces to storm the control room of the S.S. America."