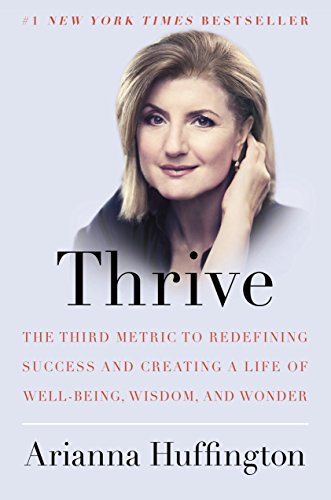 Thrive: The Third Metric to Redefining Success and Creating a Life of Well-Being, Wisdom, and Wonder

Media mogul Huffington lays out steps to creating a lifestyle where success is measured not by money and power, but something more meaningful. She criticizes “America’s workplace culture... fueled by stress, sleep-deprivation, and burnout,” and compliments efforts by companies like General Mills for its “mindfulness program” and LinkedIn for “managing compassionately.” Huffington Post, she reports, exemplifies the “third metric” tenets—“well-being, wisdom, wonder and giving”—with nap rooms, meditation classes, and an app called “GPS for the Soul.” Huffington cites studies on the health benefits, both physical and psychological, of meditation, adequate sleep, and exercise. One study finds people who had participated in volunteering reported feeling healthier, happier, and less stressed. Huffington also recalls incidents in her own life that have led to wisdom, including her hospitalization for exhaustion, a stillborn baby, and her daughter’s struggle with addiction. Discussing death, she advises opening up a dialogue with the dying, powerfully evoking the dignified passing of her own mother. Huffington draws from both Eastern and Western philosophy, and though it’s a bit rich when she criticizes the media for chasing viral stories, this is otherwise an excellent guide for individuals aspiring beyond the rat race or businesses seeking to elevate employee morale and well-being. (Apr.)
close
Details