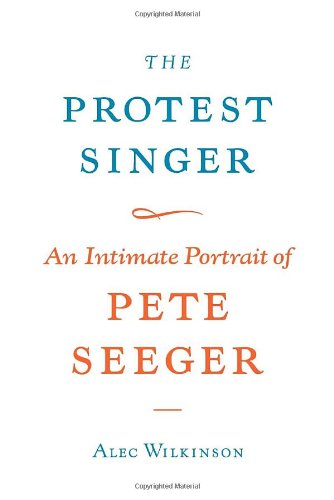 The Protest Singer: An Intimate Portrait of Pete Seeger

In his latest book, writer Wilkinson ( ) gives due praise to the influential American singer Pete Seeger, who humbly told his biographer that “what's needed is a book that can be read in one sitting.” It is just such a spirit of humility that emerges from Wilkinson's lovely and, indeed, brief profile of Seeger (who turns 90 in May), at once social activist, environmentalist and, above all, courageous musician, the peoples' singer, who wholeheartedly believed in his father's dictum that “music, as any art, is not an end in itself, but is a means for achieving larger ends.” Wilkinson's thorough research is artfully couched in his extended interviews with the singer on his wooded property in upstate New York, during which Seeger elucidates his storied genealogy, recounts his times with Woody Guthrie and describes his testimony before the House Un-American Activities Committee in 1955 (the full transcript of which is reprinted as an appendix). Wilkinson's biography reads as lucidly as if we were there with him, listening to Seeger's history as he boils maple sap down to syrup and chops his daily quota of firewood. In Wilkinson's writing, one can almost hear Seeger's axe splitting the logs.