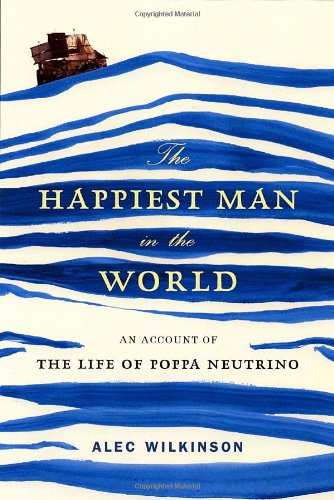 The Happiest Man in the World: An Account of the Life of Poppa Neutrino

Over the last few years, Wilkinson ( ) has been spending quite a bit of time in the company of "Poppa Neutrino," a homeless man who's performed as a street musician in New Orleans and New York and traveled across the Atlantic in a homemade raft. So "lavish and prodigal" is Neutrino's history that his barroom encounters with Kerouac and Ginsberg at the height of the beat era are dispensed with in a few sentences—after all, by that time, he'd already been crisscrossing the country for several years himself. In Wilkinson's company, Neutrino spends time in Arizona trying to persuade football coaches to use a passing play he's developed that could conceivably revolutionize the offensive game, winding up on a Navajo reservation where he volunteers with a high school team. Then it's off to Mexico, where he puts the finishing touches on one more raft, which he hopes to sail down the coast to South America and then across the Pacific. For the most part, Wilkinson simply observes, acting as our conduit to this abrasively compelling personality. But that's like saying Boswell was simply observing Johnson: the portrait of Neutrino that emerges from these encounters and anecdotes is a truly captivating story.