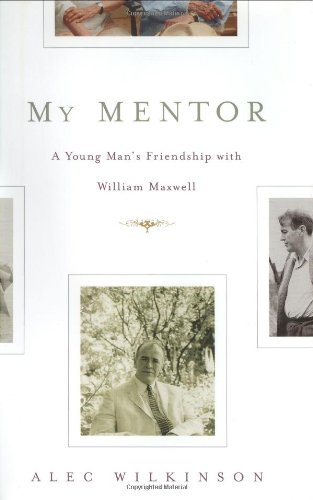 MY MENTOR: A Young Man's Friendship with William Maxwell

The literary gods must have smiled on future writer Wilkinson (), for he lived the dream of aspiring writers everywhere: to have for decades the ear (and eye) of a giant, the late William Maxwell, acclaimed novelist and legendary editor. Wilkinson became a part of the aging Maxwell's life at the tender age of 24, introduced by his father, who had befriended his longtime neighbor. Not only did Wilkinson learn the craft, but embedded in Maxwell's simple, irrefutable lessons were important life philosophies, and Wilkinson came to see Maxwell in profound and paternal terms, until his death in the summer of 2000, at 91. This is a brief but heartfelt book, the prose unadorned, the structure loose yet only occasionally meandering. While Maxwell's writing periodically overshadows his mentee's, Wilkinson delivers several poignant, even Maxwellesque, moments, as when noting his mentor's physical deterioration: "his wrist hardly filled his shirt cuff any longer." Aside from Maxwell's early life and writings, Wilkinson provides glimpses into a bygone era at the , the significant personalities, the office idiosyncrasies and Maxwell's ascendancy. The book's drawbacks: the unhappy relations between Wilkinson and his father remain vague, undercutting the significance of his tutelage, and Maxwell, at times, comes off as two-dimensional in his near-saintliness. The volume's main strength is Wilkinson's tender rendering of the lion-spirited Maxwell's almost sublime acceptance of his coming death, and the sadness and sense of unmooring felt by those around him. But for Wilkinson, Maxwell's presence was a once-in-a-lifetime gift.