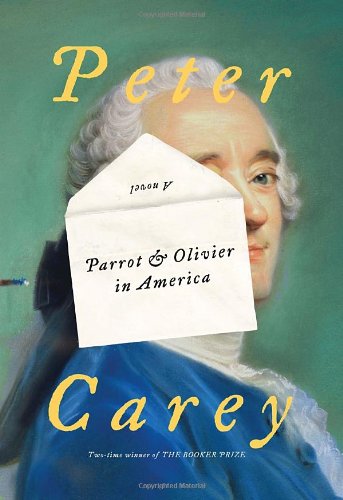 The eminently talented Carey ( ) has the gift of engaging ventriloquism, and having already channeled the voices of Dickens’s Jack Maggs and the Australian folk hero/master thief Ned Kelly, he now inhabits Olivier-Jean-Baptist de Clarel de Barfleur, a fictionalized version of Alexis de Tocqueville, whose noble parents are aghast at his involvement in the events surrounding Napoleon’s return and the reigns of Louis XVIII and Charles X. To remove him from danger, they send him to America, where priggish snob Olivier inspires Carey’s humor during his self-centered adventures in New York, New England, and Philadelphia. Olivier can’t shake his aristocratic disdain of raw-mannered, money-obsessed Americans—until he falls for a Connecticut beauty. More lovable is Parrot, aka John Larrit, who survives Australia’s penal colony only to be pressed into traveling with Olivier as servant and secret spy for Olivier’s mother. Though their relationship begins in mutual hatred, it evolves into affectionate comradeship as they experience the alien social and cultural milieus of the New World. Richly atmospheric, this wonderful novel is picaresque and Dickensian, with humor and insight injected into an accurately rendered period of French and American history.