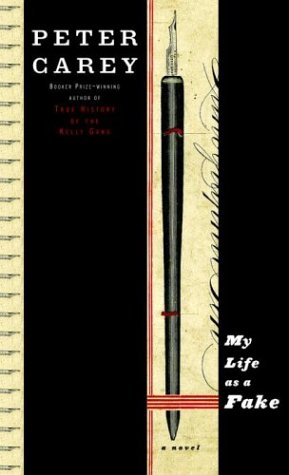 MY LIFE AS A FAKE

Carey, who won the Man Booker Prize for his , takes another strange but much less well-known episode in Australian history as the basis for this hypnotic novel of personal and artistic obsession. He tells it through the eyes of Lady Sarah Wode-Douglass, editor of a struggling but prestigious London poetry journal, who one day in the early 1970s finds herself accompanying an old family friend, poet and novelist John Slater, out to Malaysia. There they encounter an eccentric Australian expatriate, Christopher Chubb, who concocted, Slater says, a huge literary hoax in Australia just after the war, creating an imaginary genius poet, Bob McCorkle, whose publication by a little magazine led to the suicide of the magazine's editor. Now Chubb offers Lady Sarah a page of poetry that shows undoubted genius and claims it is from a book in his possession. Lady Sarah's every acquisitive instinct is inflamed, but to get her hands on the book she has to listen, as Chubb inflicts on her, Ancient Mariner–like, the amazing story of his own epic struggle with McCorkle. In the end, the vaunted manuscript is revealed to be in the care of Chubb's fierce daughter (long ago kidnapped and raised by McCorkle) and a deranged Chinese woman. To what lengths will Lady Sarah go to get it, and how will the women keep it from her? The tale is a tour de force, with a positively Graham Greene–ish relish in the seamy side of the tropics, a mix of literary detective story and murderous nightmare that is piquantly hair-raising. And just when it seems that Carey's story is his greatest fantastic creation to date, he lets on that the hoax at the heart of it actually took place in Melbourne in 1946. As so often before, this extravagantly gifted writer has created something bewilderingly original and powerful.