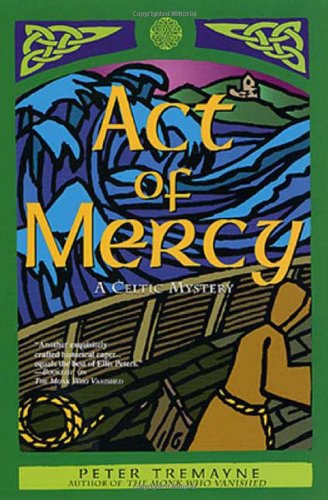 As usual, persuasive period detail lifts Tremayne's () latest Sister Fidelma mystery. The year is A.D. 666. On Ardmore Bay, on the Irish south coast, a tavern keeper named Colla finds the body of a young woman killed with a knife. ("The white linen of her shift was ripped and torn and suffused in blood. He had never seen such savagery inflicted with a knife before. The body had been cut——as if a butcher had mistaken the young woman's soft flesh for that of a lamb to be slaughtered.") From then on, we are at sea in more ways than one: Sister Fidelma joins a small group sailing aboard on a pilgrimage to the Holy Shrine of St. James. On the first night out, the ship is buffeted by a relentless storm, and Sister Muirgel is apparently washed overboard; a thorough search of the ship fails to turn up her body. When her bloodstained robe is found, murder is suspected, and Sister Fidelma begins an investigation; but things are not quite what they seem. With a killer on board, Sister Fidelma must solve the mystery and unmask the murderer before the ship reaches the shrine; unfortunately, the denouement, while plausible, is slightly disappointing after the elaborate buildup. Still, for those addicted to historical mysteries in general (and Ellis Peters's Brother Cadfael series in particular), this delivers: the tactile and sensory impressions of being aboard a seventh-century sailing ship are vividly rendered, right down to the taffrail and the mainmast.