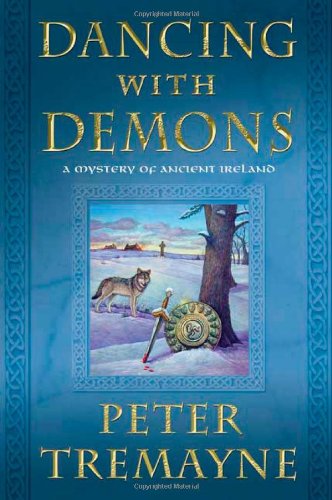 Dancing with Demons: A Mystery of Ancient Ireland

Judicial advocate Sister Fidelma takes on her most sensitive assignment yet in Tremayne's excellent 16th mystery set in seventh-century Ireland (after 2007's ). When Sechnussach, “High King of the five kingdoms of Éireann,” is assassinated, the killer appears to be a kinsman, Dubh Duin, found in the king's bed chamber, dying by his own hand and still bearing the knife that apparently struck the fatal blow. Since the powers-that-be are concerned that Sechnussach's heir, Cenn Faelad, not fall under suspicion, they appoint Fidelma, as an outsider, to uncover the motive for the crime. She soon finds that a person, possibly someone close to the throne, had arranged for Duin to get past the king's guards and enter Sechnussach's chamber unchallenged. Tremayne does his usual masterful job of depicting the strain between Christianity and the Old Faith, and provides a logical, if surprising, twist toward the end.