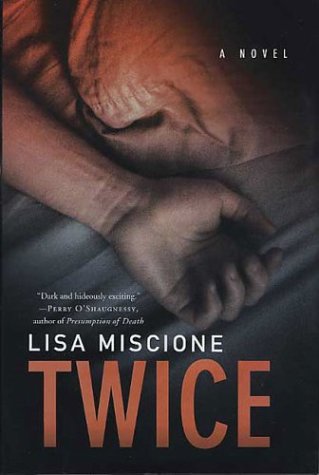 Readers who like their psychological thrillers complex, melodramatic and almost completely implausible will find Miscione's third Lydia Strong novel ( ; ) right up their alley. Everything comes in pairs—murders of an artist's ex-husbands, possible twin villains, missing twin children—to such a degree that the book should have had a second jacket. The novel begins as New Yorker Strong, a true-crime writer, jogs along the streets of lower Manhattan toward the Brooklyn Bridge, worrying about two major dilemmas—she has just learned that she is pregnant, and the psychopath who killed her mother 15 years before is back on the streets and stalking her. Then comes the savage murder of the second husband of famous painter Julian Ross, who lost her first husband in a similar brutal attack 10 years earlier. Hired by the artist's imperious but touching mother to prove that Julian (acquitted by a jury in the first murder) isn't guilty of the second, either, Lydia, lover/partner Jeff Mark and their associates two-step their way through a convoluted plot with more strands than a DNA sample. A certain amount of suspense is generated along the way, especially for readers who can suspend disbelief, but Miscione finally loses her gamble by doubling her ante one time too many.