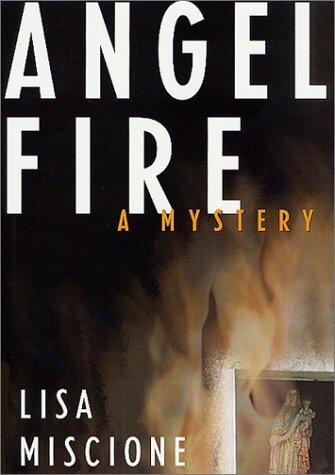 Miscione hits the ground running, quite literally, in her debut novel featuring crime writer Lydia Strong, who tries to exorcise through running ("her religion," she says) the demons that haunt her from her mother's brutal rape and murder some 15 years earlier. Strong has taken refuge in rural Angel Fire, N.Mex., far from suburban New York where, delinquent from school one day, she returned home to find her mother's "arms tied over her head, her wrists bleeding.... Her throat was slit from ear to ear." This early scene of mayhem sets the tone for a grim tale of dark and twisted minds committing ever more ghoulish crimes against parishioners of a local church run by a sinister priest and a blind mystic. The author spares no detail in her descriptions of mutilated bodies buried in odd places with their hearts cut out. Strong herself becomes the target of a psychopathic killer and seeks assistance from sympathetic former colleague Jeffrey Mark, an ex-NYPD investigator who flies in for the duration. There's a surreal and nightmarish quality to this story as innocents, one after another, are drawn to their slaughter soon after seeking help from Juno, an enigmatic guitar player believed by the locals to have godlike healing powers. , the title of Strong's bestseller (not to mention of an early Mickey Spillane bestseller), is also the message sent by a sick mind bent on destroying nearly everyone in this unfortunate mountain village. This novel isn't for readers with weak stomachs, but it remains gripping and terrifying right through the carnage of its final scene.