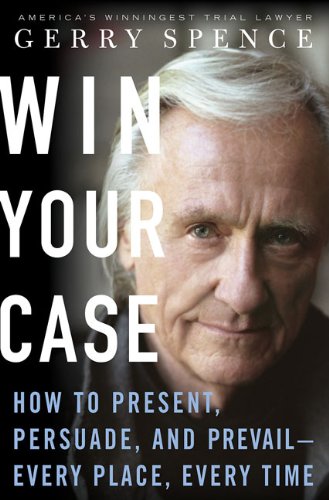 Win Your Case: How to Present, Persuade, and Prevail—Every Place, Every Time

Spence's cowboy Uncle Slim once said, "You can't get nowhere with a thousand-dollar saddle on a ten-dollar horse." Noted trial lawyer Spence ( ) applies this principle to anyone making a case, whether to a jury, a customer or a boss. Tricks and techniques are the high-priced saddle, he says; more important is the person making the case. Thus his method focuses on "the power of being genuine." Even fear, he says, can be used to one's advantage by connecting to the decision maker's own fear. The book first focuses on preparing for the "war" (as Spence calls every case) by discovering this power in oneself. Then it deals with waging the war: improving one's storytelling skills, conducting effective opening and closing statements and using witnesses. He makes a persuasive case for his approach, but his advice is often overwrought and overwritten ("Although we are the same in countless ways, we are, nevertheless, as different from one another as a diamond from rubies, which makes each stone unique, beautiful, and valuable"). Spence's tenets also get lost in his tirade about the injustices of the legal system. It's clear why Spence wins his cases, but he won't necessarily win readers over with this volume.