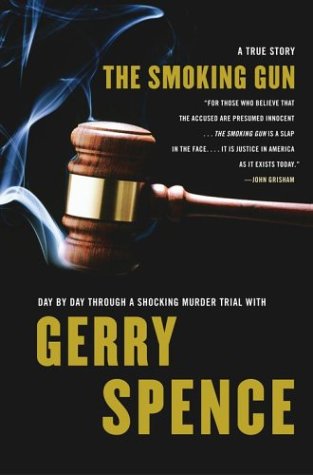 THE SMOKING GUN: Day by Day Through a Shocking Murder Trial with Gerry Spence

A nationally renowned trial attorney and author, Spence (; ) introduces his latest book with a cautionary pronouncement: this could happen to you. What follows is an electrifying and sensational true story of an Oregon murder trial that dragged on for more than three years in the late 1980s. In July 1985, Sandy Jones and her teenage son were charged with the murder of Wilfred Gertulla, a neighbor and smalltime real estate developer. Gertulla's wife was present when he was murdered and produces a photograph of Mrs. Jones holding a smoking .22 caliber rifle—seemingly irrefutable evidence of her guilt. Spence later finds out that the Joneses, impoverished farmers and community outcasts, have been battling Gertulla and the town over a questionable right-of-way that runs through the Gertullas' property. Spence, sensing a homegrown conspiracy, decides to join the defense pro bono after seeing the abusive treatment Sandy suffers in the local jail. The state prosecutors suppress evidence, manipulate legal loopholes and generally attempt to deprive the Joneses of a fair trial in order to attain a conviction. This disquieting book shows that the facts don't speak for themselves, innocence is rarely presumed and justice is far from a first priority in America's courtrooms. Spence is a gifted storyteller and his rhetorical skills are mesmerizing. The blizzards of argument and counterargument that would be tedious reading in less talented hands are neatly incorporated into this thrilling account of injustice barely averted.