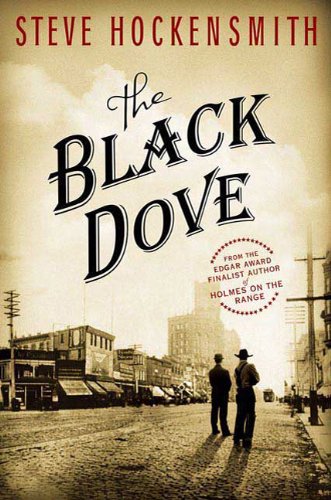 The Black Dove: A Holmes on the Range Mystery

In Edgar-finalist Hockensmith's rollicking third mystery to feature Old Red and Big Red Amlingmeyer (after 2007's ), the Sherlock Holmesâ€“loving cowboy brothers do some â€œdetectifyingâ€ in 1893 San Francisco, â€œthe world's wickedest city.â€ After their disastrous tour of duty as railway policemen, the Amlingmeyers join forces with the alluring Diane Corvus, another veteran of the railroad. Together, they investigate the death of Dr. Chan, whose luggage was thrown from the same train that the brothers patrolled and who was possibly done in by Chinese â€œhighbinders,â€ or hatchet men. Working with local law enforcement and Chinatown's â€œNapoleon of Crime,â€ Old Red and Big Red follow a twisted trail that leads from cabbage vendors to whorehouses. Despite a jam-packed plot, Hockensmith takes longer to reach full speed than in previous outings. Still, readers will delight in the hilarious climactic â€œMandarin standoffâ€ between Chinatown's underworld and Frisco's hapless police force.