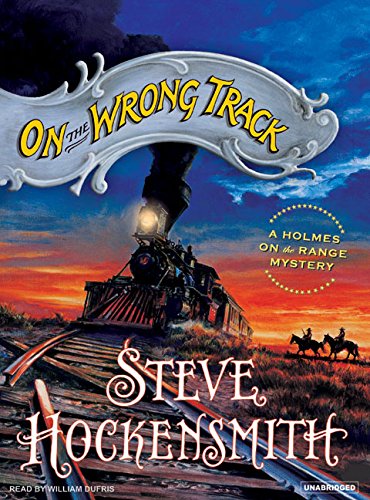 On the Wrong Track

When first hearing William Dufris, as the cowboy/writer Otto Amlingmeyer, narrate Hokensmith’s second mystery, listeners might initially think they are hearing a children’s book. Not because of the content, but because of the downright goofy caricature of this Dr. Watson of the old West (to his brother Gustav’s Holmes.) Dufris’s over-the-top playing of Otto (aka Big Red) is initially jarring. However, within an hour, what seemed a distraction becomes a strength. In fact, Big Red soon endears himself to the listener as he recounts the tale of his illiterate would-be Sherlock Holmes big brother. It is no surprise that hyperbolic characterizations are natural to Dufris. Astute listeners may recognize his voice as TV’s Bob the Builder. His colorful characters are all a bit cartoonish and that ends up being part of the charm of this package. His women are breathy, his Asians are Chan-like, and his newsboy is a hopped-up Jimmy Olsen. Hockensmith’s material and Dufris’s thespian silliness are a perfect complement to one another: its Watson and Holmes, meet Martin and Lewis.