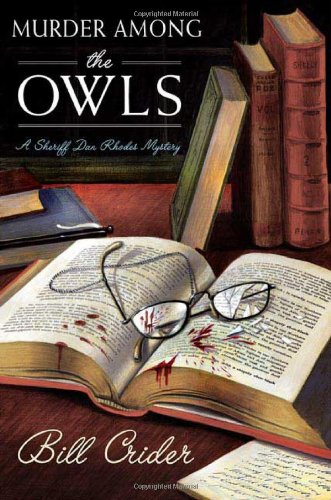 Murder Among the Owls: A Sheriff Dan Rhodes Mystery

In Crider's deadpan 14th Dan Rhodes mystery (after 2006's ), the appearance of a black cat at the sheriff's backdoor is a harbinger of bad news about its owner, Helen Harris, a community fixture and Old Women's Literary Society (OWLS) member. When Rhodes goes looking for Helen, he finds her dead on her kitchen floor, apparently from a tumble while changing a lightbulb. But the escaped housecat, which Helen never let outside, leads him to believe that her death was no accident but a cold-blooded murder. Helen's death sends shock waves rippling through the tight-knit community of Clearview, Tex., and Rhodes's investigation reveals how love among the Geritol set can be just as fraught as it is for the young. His shrewd handling of entertaining suspects—including a trailer park Don Juan Leo Thorpe and Helen's grieving lover—crackles with wickedly wry wit. Rhodes's laconic, laid-back detecting style—a cross between Tom Selleck and Willie Nelson—makes for top-notch down-home crime solving.